Vietnam is home to 54 ethnic groups, each of which has its own unique cultural identity. At the Vietnam National Village for Ethnic Culture and Tourism, ethnic minority people join State agencies and experts in preserving and introducing their communities’ cultural values to visitors.

The village, located in the Dong Mo tourism area in Hanoi’s Son Tay town, is described as a “common home” of the 54 ethnic groups across the nation. It has a total area of 1,544ha with seven functional zones. Among them, the zone for ethnic minority villages is considered the heart of the culture-tourism village.

So far, people from 13 ethnic groups have come from every corner of the country to reside here, including Tay, Dao, Muong, Thai, Kho Mu, Ta Oi, Co Tu and Khmer.

Thanks to them, the culture of these groups has been demonstrated through not only their traditional houses or places of worship, but also the daily activities and festivals held by ethnic minorities in the village. 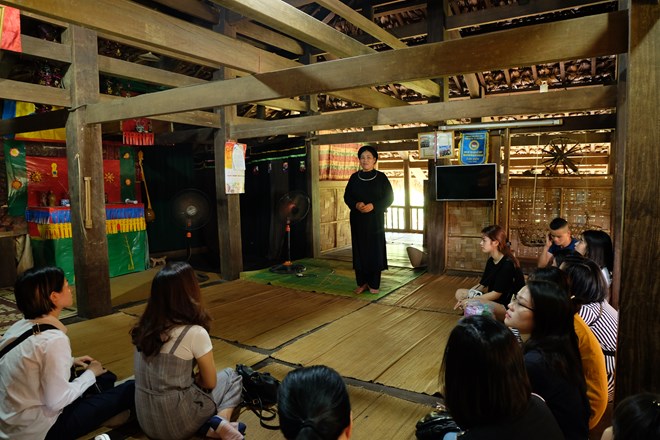 At a traditional house of Tay people, Nguyen Thi Xuyen in traditional costume welcomed visitors with broad smiles. She briefed us about how the house was built and how their clothes made. We later enjoyed the minority’s “then” melodies, a national intangible cultural heritage that is seeking UNESO’s recognition, performed by herself and her young Tay fellow people.

She told us that she comes from the northern mountainous province of Thai Nguyen and has lived at the village for four years. Currently, the house is home to eight Tay people from different localities, who are responsible for preserving and popularising their cultural values.

To be eligible to be invited here, they must have insight and knowledge about their culture and be able to illustrate the daily life of Tay people.

Xuyen said she felt homesick during the first days of living there because she was far from her family and neighbours, but now she was used to it and can return to her hometown in Thai Nguyen every two or three months.

“I sometimes feel like a soldier. A soldier protects the country, while I come here to maintain my community’s culture. We represent all Tay people to introduce the quintessence of our culture to visitors,” Xuyen said.

She added that she was delighted to welcome visitors, but also felt sad after saying farewell to them.

Meanwhile, the tranquil atmosphere of the Xe-dang ethnicity village was brightened up by the sound of Klong put and T’rung, traditional musical instruments made of bamboo.

Artisan Y Sinh and several women from Dak To district, the Central Highlands province of Kon Tum, left their home for the culture-tourism village to showcase their minority’s cultural values.

“Although I was not trained to become an artist, I came here to save our ethnic group’s culture. If no one does something, the traditional music will disappear forever,” Sinh said. 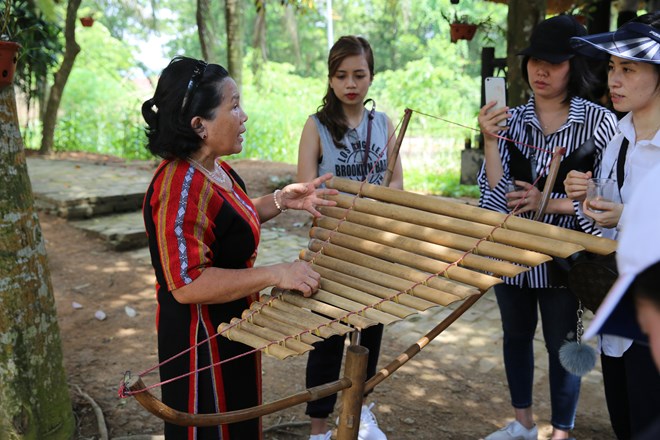 With burning desire and skill, Sinh has successful revived the original T’rung and Klong put, which had almost slipped into oblivion. She has also made new musical instruments to diversify the bamboo orchestra.

In the beginning, she was only meant to stay in the village for a few days to join events and programmes, then the village management board invited her to stay to introduce her ethnic group’s culture.

“I feel grateful to the Party and State for building a cultural space for Xe-dang people in this village, the common house of all 54 ethnic groups. It will be very joyous if people from all the groups come here as we will have a chance to exchange with other groups. Aside from that joy, we can also together introduce our communities’ culture to tourists,” she said.

At another area of the village, young men and women of the Ta Oi ethnic minority group from A Luoi district in the central province of Thua Thien – Hue were performing a traditional dance to celebrate the new rice festival. Nearby, a woman was weaving to show visitors her ethnic group’s traditional craft which has been recognised as national intangible cultural heritage. 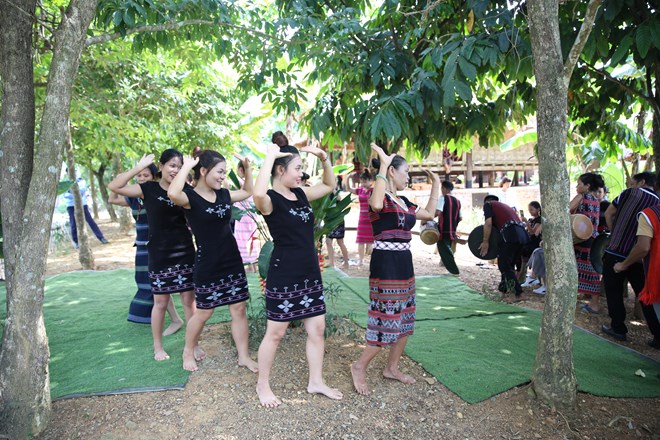 Ho Thi Tu, a woman from the ethnic group, said these are regular activities at the village, adding that implementing the Party’s guidelines on cultural preservation, people have come to the village to introduce their cuisine, agricultural products and “Zeng” weaving.

“People want to preserve and promote the unique culture of the Ta Oi ethnic group,” she said.

Dong Feng, a visitor from China, called the gathering of ethnic groups in one place a “good idea” because ethnic minority groups often live far away from the largest ethnic group of Kinh people.

“If ethnic people want to learn about different cultures, they have to go very far. This would be very difficult. Therefore, when people are brought together at the village, they can easily study the life, customs and culture of other ethnic groups,” he said.

Nguyen Van Thai, a tourist from Hanoi, said that he came here to learn about the ethnic minority cultures that he had only read about in newspapers before.

“Visiting the village today, I find that the Vietnamese ethnic cultures are diverse and beautiful. I could enjoy dishes of Tay ethnic groups and I really liked it. I will recommend my friends to the village.”

The Vietnam National Village for Ethnic Culture and Tourism aims to preserve and promote ethnic cultural values as well as enhance mutual understanding and solidarity among ethnic groups.

With the policy of “letting ethnic groups introduce themselves”, the management board of the village has worked with localities to welcome thousands of people from ethnic groups to join activities at the village.

The activities truthfully reflect the life and festivals of ethnic groups, which creates a special attraction to visitors.

The presence of ethnic minority people at the village has brought vitality and become the soul of the ethnic villages.

In 2018, more than 560 ethnic minority people from 39 localities along with 14 groups of ethnic communities from the northwestern, Central Highlands and southwestern regions recreated 22 traditional festivals at the village. The participation of nearly 500 theatre artists contributed to creating a picture of cultural diversity at the “common cultural house.”